Oh why do you displease me, Santa Monica bike lanes? 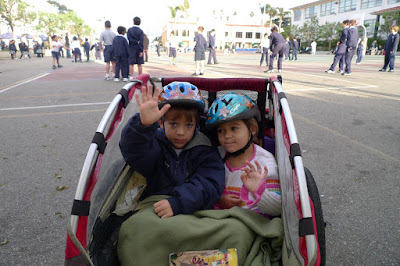 One of the main elements of our family's "bikes-as-transportation" crusade is taking the kids to school in the morning in the bike trailer. They go to two different schools, one on the north end of town and one on the south. It makes for a nice five and a half mile round trip, with one short climb on the way home. Just a block or so, but still pulling about 60 extra pounds at that point makes the heart pound a bit.

Once we get home I can shower and get back on the bike and head off to work (without pulling the extra weight), an easy two mile ride each way.

While Santa Monica has a partial grid of bike lanes (and the dubiously useful "bike routes") they are definitely a work in progress. It seems that they are chosen less for "How can we get cyclists to various important destinations safely?" than "Where do we have a little extra space?" So you end up with lanes that come and go, end short of obvious destinations (like the downtown/Promenade area), and often still leave riders choosing between chancing it with fast moving cars (or getting doored) and just retreating to the sidewalk. 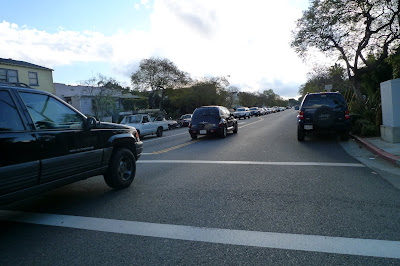 This photo attempts to show how the bike lanes stop as you approach busy intersections, and then don't begin again for about 100 feet after the intersection. You can just barely see the lane restarting up in the distance. This happens every block. So as you approach and then cross the intersection there is no space for the rider anymore. You need to just force yourself in (or wait for all the traffic to pass) and the cars have to move over into the opposing left turn lane to pass. Often we just bail up onto the sidewalk and dodge pedestrians.
Maybe I shouldn't complain since our city is pretty "well endowed" by local bike-friendliness standards, but those standards are pretty low. Our bike infrastructure could be useful, well-designed and safe. It should be. I mean, there are times it just feels borderline irresponsible to have my kids in the trailer out there among the oblivious behind-the-wheel texters. There are several individuals and groups working on bike advocacy here in L.A. in general, and I'm working to find them, meet them and help them.

I guess I just have that condition familiar to those that love and appreciate bikes - the belief that they are a wonderfully healthy, efficient, fun, community enhancing machine, and dismay that others don't enthusiastically agree. Bikes are one of the easiest ways to make a real and positive change in your world. The reasons to encourage people to use bikes are seriously no-brainers. They provide benefits without downsides. Bikes directly address issues of great concern to our country, from personal to environmental health. It’s so easy a kid can do it, it just takes a break from our habit of getting in a car every time we walk out the door. So we get a bit annoyed when we hear politicians or other foot-draggers say it’s not worth it, or it can’t be done.

It is worth it, and it can be done. 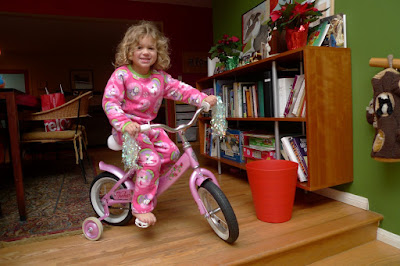