Bike Boulevards - I want to go to there

In thinking about ways to improve bike accessibility and safety I often find the idea of bike boulevards very appealing. As I ride around Santa Monica, the most pleasant streets to ride are, ironically, usually roads that don't have bike lanes; those side streets that are not major auto thoroughfares and as such are less traveled, generally at slower speeds. Euclid between Pico and Ocean Park is a perfect example, or 21st Street in the same area as shown in this photo. Who wouldn't want to ride there? 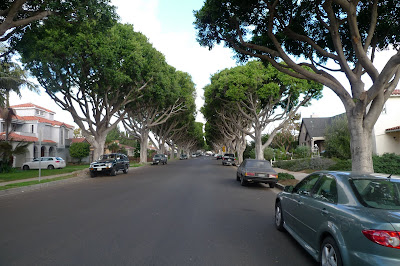 The problem in using these streets for bike commuting is usually the same reason cars don't use them - there are not lights to get you across major cross streets. But the bike boulevard approach makes use of these streets, sometimes including planters so that bikes can get through but cars can't, and bike-triggered lights to cross those busy streets. As with everything else there are issues, and I'm sure Big Car (you know, the volunteer car lobbyists that seem hellbent on acting all victimized whenever cyclists want some small piece of the pie) would complain, but wouldn't it be better than trying to cram bike lanes into already heavily traveled arterial routes? Just today I was riding up Ocean Park and I was thinking it's amazing that you can be in a bike lane and still get doored - that's just nuts.

I'm still thinking about the boulevard concept, but it seems like the direction bike advocacy should go when possible - make use of parallel, lightly traveled streets. And this idea needs to be forced into the heads of our reps in government. It often seems that when asked about their opinions on bike issues they just say, "More bike lanes!". We need to make sure whatever infrastructure dollars and attention we get, is actually well thought out and useful, not just a well-intentioned disappointment. Without question, people in decision-making positions should be taken out on a regular commute before deciding on anything.

And the term "bike boulevards" just sounds so classy. That's a party I want to go to.
Posted by jhaygood at 8:59 AM