So I've been thinking (again) about this idea of "the last mile". Generally that term is used in regards to public transportation and how to get people "the last mile" to their destination.

After all, we all can't live in Vauban... 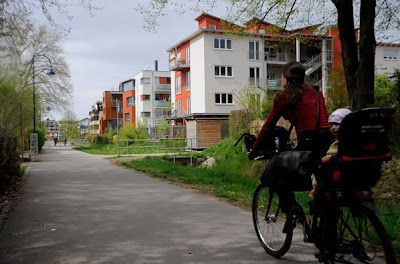 But I've been thinking of it others ways too. Many people I know and work with just live too far from work to make biking it practical. They're interested, but the realities of time, distance, traffic and sweat are too great. So I've been suggesting this idea to them - put the bike in the car, drive towards work, but park a mile or two from the office. Then bike the rest of the way.

There are a few benefits to this. Most importantly to me, it gets them some exercise and it adds them to the visible bikes-as-transportation community. Second, it reduces some traffic in the area of their office - which is usually a fairly high-density traffic area. And to a lesser degree, it cuts down on a bit of carbon burning. All of those are good things.

The thing I like about this idea is that it can work for anyone. They don't need to have the ideal situation I have - 2 1/2 miles to the kid's school, and 2 miles to my office. (I also make a bikeable commute a priority - before taking my current job my first question was, "I don't have to drive to Burbank, do I?" But I know I'm lucky in that regard. )

One consideration is where to park when they hop on the bike for the last mile. That issue will be different in all cases, but it doesn't seem insurmountable.

So, I think there's something to this. This could be a good outreach idea, since many people aren't joining us in the bike lane because of distance. But if you remove that hurdle, maybe they'll join us?