The NYT gets bike friendly 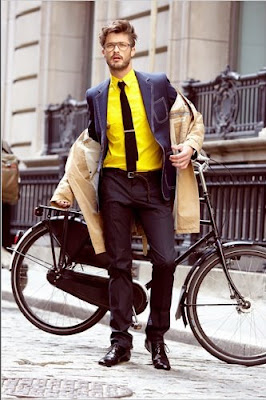 Thanks to M.I. for sending me the link to this NYT feature on Dutch bikes coming to this side of the Atlantic. They present biking as a way to get from one place to another, and in style at that (Complete with details on the $1,900 Prada suits the models are wearing, etc. Personally, I'd rather buy another bike...)

They bring up a lot of good points (that will be familiar to anyone who already rides), but kudos to them for spreading the word. (And some of the photos have the Simple City bike I talked about here.)

I like how they emphasize the state of biking in the States, which is still saddled with a pretty exclusively "athletic" image. That's all fine, but it limits bikes integration into regular family and commuter life - simply as a mode of transportation - and keeps many people's bikes in the garage except on weekend outings to the beach or the park.

There's also a nice multimedia feature too (the NYT produces some really good ones) and while the content attempts to address the impression of a Dutch bike as too feminine (Europeans don't see the step-through frame style as exclusively for women...) the "queer eye" voice over doesn't do much to help that stigma!

But hey, it's all a step in the right direction, and the fashion element of city bikes is a nice part of changing people's attitudes of what bike riding can be about.
Posted by jhaygood at 8:29 AM