My friend Mark sent me a couple photos he's taken while working in NYC. Though I'd been aware of a substantial cycling culture there, I hadn't thought much about New York as some kind of bikes-as-transportation Mecca. But as a recent NY Times feature confirms, NYC is looking at bikes with fresh eyes. For starters, these bike lanes: 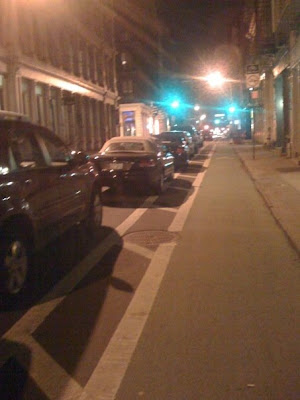 Photo by Mark Imgrund
I would love to see this kind of thing in Santa Monica. Bike lanes separated from traffic (between parked cars and the curb, not between parked cars and the traffic...), and with the I-must-be-dreaming anti-dooring zone built in. Now that is some real Portland-on-the-Hudson enlightened infrastructure there. I mean seriously, if New York City can carve out a couple feet for safe bike riding in a dense urban area, can't we? [UPDATE: Commenter Alexander posted a link to this interview with the Commissioner of the NYC DOT. Amazing glimpses of the improvements in NYC and the leadership at the top that makes it happen. Can we get some leadership like that here in LA/Santa Monica?!]

Then in the next photo, a local business takes it upon themselves to make a difference: 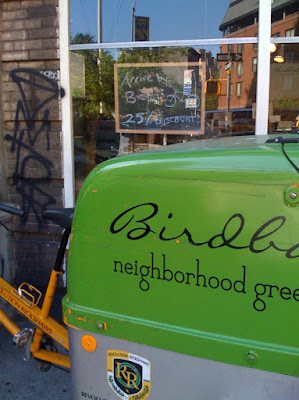 As you can (vaguely) see on the sign in the window, "Arrive by bicycle - 25% discount"! There is nothing in it for this business (I mean 25% off! That's real money), nothing except the love and devotion of local biking customers. It's just the right idea - that's the upside. I also notice the Revolution Rickshaw out front for deliveries... 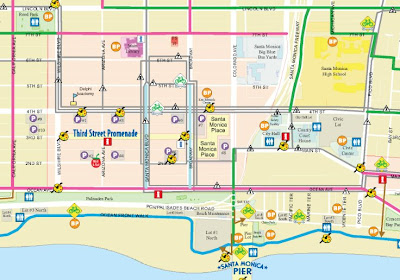 This is one of my pet peeves - as you can see in the map, the pink bike lanes all end about 3 blocks before you get to the Promenade... I know 3 blocks isn't much, but they are 3 blocks where the streets and sidewalks are totally jammed. If Santa Monica wants people to ride there (which appears questionable), spend some cash at a local business and then ride home, you need to create a safe route (that a family could ride). Us hardy, everyday riders can wing it, but it's a real barrier to new riders. And don't let the green "Bike Routes" fool you - they are totally useless for anyone but the most daring (Lincoln Blvd.? A bike route? Really...?).

Whenever we get to the "Bike Route" sections of our daily ride towing the kids to school, marked with the "Share the Road" signs discreetly tucked behind trees and such, it translates consistently as "Get on the Sidewalk". They really are a (well-intentioned) joke...

What if there were actual incentives to ride to the Promenade? The benefits to overcrowded parking structures and general congestion are obvious. What if we had at just one route in - say Arizona Ave.? That would also serve the Farmer's Market. Maybe have a bike valet like the Sunday market down on Main Street. Maybe some actual discounts for people who ride there (maybe a coupon for a dollar off the next time you get stung $50 for leaving your car at home on street cleaning day...).

While we face depressing cutbacks in bike infrastructure, we need to find creative ways to encourage people to use the bike that don't cost much to local government. Though as we see stimulus money flow into the state, if we could carve out just a tiny fraction of those millions it could go a long way if the ideas are responsible, practical, and truly encourage riding. This map shows where transportation dollars are going, and as you move the mouse over the counties in California an obvious pattern develops - roads and highways are getting the cash. You move up to Oregon and you see another story - Trails and other alternatives are seeing some real love.

But California? Not so much...

But there are some positives. Obama announced new national fuel standards today, with both auto workers and executives at his side. Matt Yglesias offers some praise (and a bit of silver-lining darkening...). And I'll link here to his earlier post pointing out that George Will is, in fact, a tool, and takes particular issue will Will's (now regular) ignorance of the facts. In this case, ragarding the number of Americans that commute by bike... [UPDATE: Oregon Congressman Blumenauer (co-chief of the Congressional Bike Caucus) throws down, challenging Will to a transportation tie-off - defending Portland's approach. What's the matter GW? Ya chicken?]
Posted by jhaygood at 11:14 AM