The Chariot Corsaire XL - Big enough for my kids, but how about an adult size?

A very big part of our transformation into a bikes-as-transportation family has been the bike trailer. We have 2 kids that we tow across town to school every day -- about a 5-mile round trip. I know... what did they ever do for us?

Plus, the trailer is great for hauling all the groceries and other crap that would be awkward on a bike without the extra square footage, as this gentleman demonstrates:

More at Fail Blog
Not that it would have helped Matt Lauer... 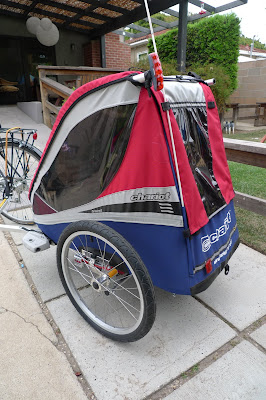 It's hard to explain to someone who drives the same route to school that it is not some big sacrifice for us to tow the kids on bikes. We like it. It's less stressful. We don't have to get all up in some Escalade's grille over the last parking space (obviously an Escalade's grille is one place bike riders particularly avoid). We're in better shape than we've ever been, and we don't need to darken the door of a gym. I know, sad -- just think of all the swell times we are missing out on.

But enough of that. On to our new trailer - the Chariot Corsaire XL. (The XL is for eXtra Lovely! I mean, check it out!) 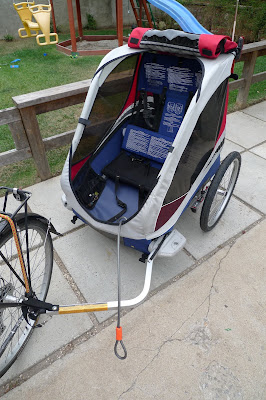 The issue we had in choosing a trailer was the fact that our kids, at 4 and 6, are getting bigger. The thinking in the bike trailer industry seems to be that once kids can ride a bike, there is no more need to tow them (I guess 'Big Trailer' has decided trailers are for entertaining toddlers as opposed to family transportation). But, even though our kids can ride, they aren't ready for a 5-mile trek through the mean streets of Santa Monica. Given our kids' sizes (the older one is about 44" tall), legroom and headroom mattered most. 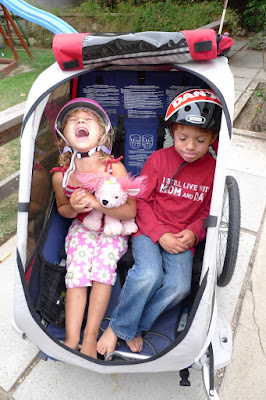 A bike trailer can haul many moods from A to B.
We actually bought a Burley D'Lite first, but it didn't have the legroom we needed. As I recall, the D'Lite had about 17" of legroom while the Corsaire has about 21" -- a substantial difference. 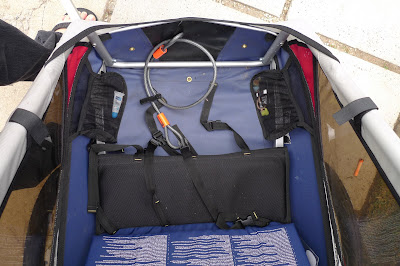 There are plenty of pockets where you need them, and little ventilation windows the kids can open from inside. We added an extension for our lock that loops around a bar in the trailer, so we can feed our bike lock through it when we need to lock up. This keeps our bike and trailer our bike and trailer, and keeps us from being memorialized on the pages of bikesnobnyc for bike lock fail - unlike the bike owner below: 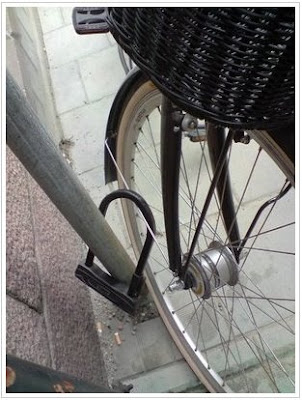 As bikesnob commented, "Oh yeah. That's not going anywhere."
Seriously if you aren't reading bikesnobnyc, you're missing out on
the discrete charms of bike related sarcasm/snobbery.
The Corsaire tows and rides great. It attaches to the bike with this ball and socket deal. The trailer's movement is totally independent of the bike's, and it's very easy to take on and off. We bought an extra hanger (10 or 15 bucks) that attaches to the quick-release on the rear wheel so we have one on my wife's bike too. (They supply a longer quick-release skewer that you may or may not need.) 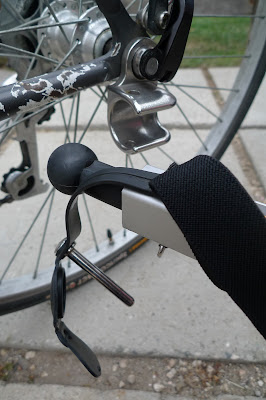 The attachment mounts right next to the scars left by
our old trailer's bloodthirsty attaching claw...
The ball slips into the metal cup attached to the bike, then the metal pin slips through the holes to hold the ball in place, and the rubber strap locks the whole package down. There is also a nylon strap that loops around the seat stay to satisfy the Department of Redundancy Department. 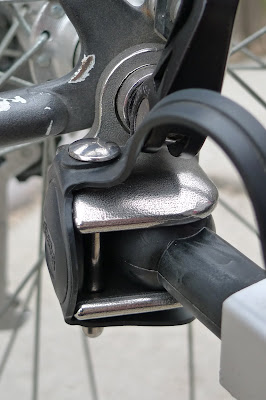 It literally takes about 20 seconds to switch from one bike to the other. 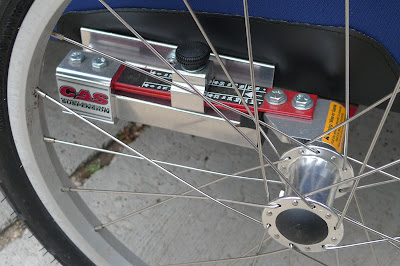 The rear wheel suspension on the Corsaire really works - I was surprised how much difference it made. The ride for the kids goes from smooth to bouncy (road-surface depending), but they seem to get a kick out of that. After all, they aren't performing a bris back there...

The suspension can be easily adjusted with the black knob (pictured above) for different weights on each side. There is also a parking brake that attaches to the rear of the trailer, but we left it off to reduce the overall weight a bit. The brake didn't pass the weight-to-usefulness challenge. 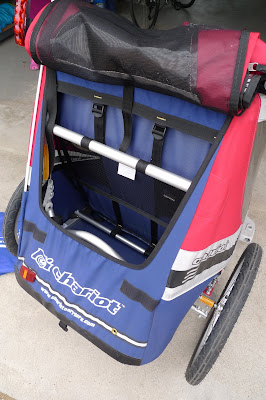 There is storage in the back, enough for a couple small kid's backpacks and a few other items. It's a bit of a tight squeeze fitting things in through the opening, but it's roomier inside. The storage area is covered by a flap, and it's pretty rainproof. There's also a pocket in there to stow a bike lock or whatever you don't want smashed.

The cover on the front is also pretty rainproof, though not totally water-tight. But we've ridden across town in a torrential downpour and not much rain made it in - the kids got wet climbing out of it far more than rinding in it. I think there is an actual rain cover available that we might get for next winter if we feel our kids deserve such pampering. 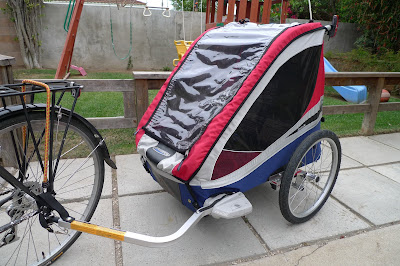 The front cover can either be this plastic cover or it unzips and rolls back to reveal a mesh screen. 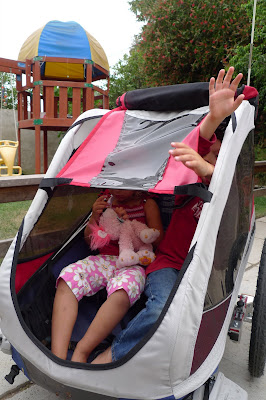 The rear flap that covers the storage area can be flipped forward as a sun shade, but we've never actually used it that way. I think the department at Chariot that came up with this had the highest incidence of drug use on the job. Just a guess. 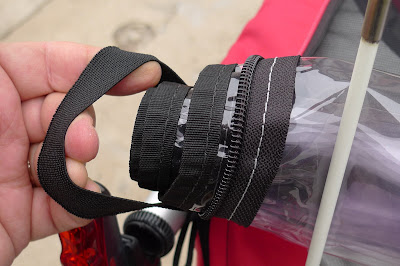 When you roll the rain cover out of the way it gets secured at the top with these stretchy loops - they don't really grab that well (because they can't slip under the rolled-up cover itself) and could be handled better with a Velcro strap or something. A nit-pick. 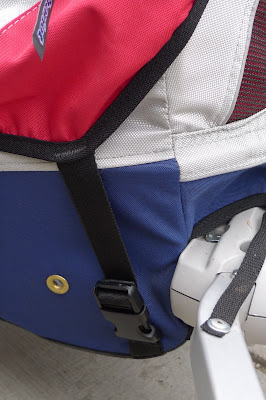 One other small gripe is the snap buckle that holds the cover down when you close it -- it takes two hands to attach it, so it's a bit of a pain when you're loading kids and getting ready to go. The Burley has a nice D-shaped ring at the end of the strap that hooks over a metal tab on the frame, so it only takes one hand. I've been trying to come up with a DIY version of that, but I haven't yet. Hey Chariot, how about comping me a retrofit when you sort this one out?

I think it can do the usual conversions to joggers and such, but I really don't know. This will be the only mention of "jogging" on these pages. We don't run.

Oh, one other thing: My bike has 26" wheels and it tilts the trailer ever so slightly down in front. My wife's bike has 700s and it's level with those. Any trailer would be the same in this regard. 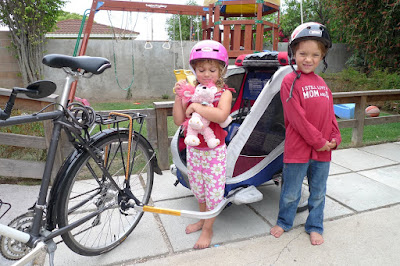 But all in all, we're really happy with the Corsaire -- we love it and get tons of use out of it, and the kids love it, too. It's built really well - both materials and craftsmanship - this will definitely last for many years out there on the road. One thing, it's love except for the price -- almost $800 taxed and shipped! You read that right. [UPDATE: Just saw an ad for a sale price of $697...] The upside is there were no options that had to be bought separately (like the arm that attaches it to the bike, which with some brands is additional). We wanted something that would fit, and it was seriously the best fit we could find. Maybe they don't sell too many of this model, so they come at a premium? But dang... Eight bills...

So come on, jump on into the Bronze Age. Your cardiologist will hate you for it!
Posted by jhaygood at 1:01 PM