OK, there have been many skirmishes in the helmet-or-no-helmet wars. It's not really a fair fight since the axis of helmet-wearers suffer fewer head injuries and as such live to fight another day, while the helmet-free need constant replacements at the front. You'd think this unfair advantage would be handicapped somehow but since there is no referee, no governing body adjudicating this debate, that attrition is simply the life-threatening head trauma the feel-the-wind-in-their-hair troops will have to bear.

So the debate rages on.

One of the complaints about helmets is their arguably off-the-charts dork factor. Even President Obama, who is generally seen as stylish, always appearing to inhabit a world of easy grace and elegance, can succumb to the fiercely equalizing dork-power that is the bike helmet. 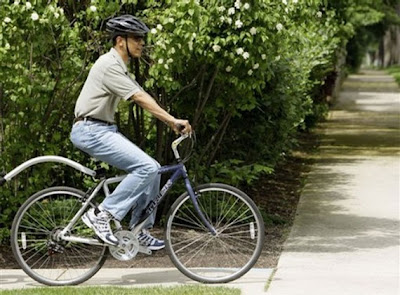 This image was received so poorly the NY Times even pulled this out in comparison: 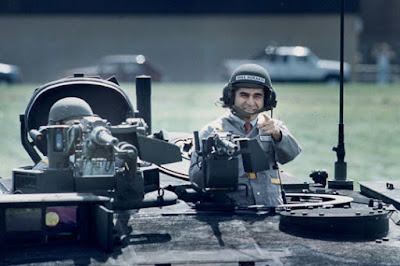 Obviously Obama was able to recover, but I have to wonder if that bike was hurting him image-wise too. Maybe he should have gone this route: 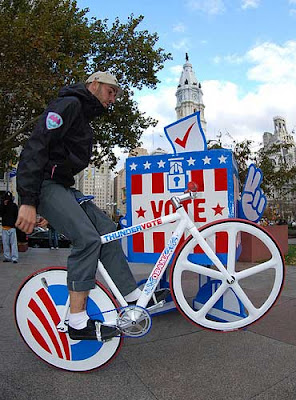 And going back to the original Obama/helmet/fail image, his bike has some attachment on the back - what is that? 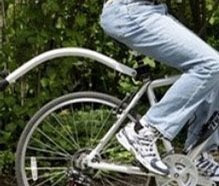 I thought long and hard, and my best guess is it's something like this: 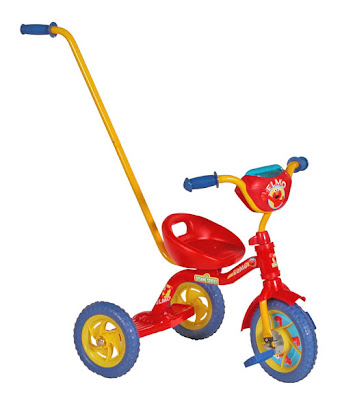 Maybe that's some Secret Service requirement? In an emergency they could swoop in and take control of the bike? Maybe it's a towbar with the nuclear football attached? (That could explain why it's cropped out in both photos I've seen - national security.)

Or is it some sad mountain bike fender? But that hardtail Trek would have to suffer an epic bottoming out to need that kind of clearance. And anyway, in that event the problem wouldn't be rear wheel clearance, it would be how to remove the saddle from the President's colon. Simple physics.

Anyway, that's all academic when the fail had already occured up top, though they really didn't have to drag Dukakis into it.

But here's the deal. Where is it written that helmets need to be crafted from 100%, corn-fed dork? Well OK, fair enough - it's written everywhere. But I'm prepared to make a prediction - from this point forward the momentum will change. "Helmet" and "Someone should say something" and "lame" and "King Dorko" and "No thanks, I don't think I'll even go to the prom this year" will no longer be found in the same sentence. 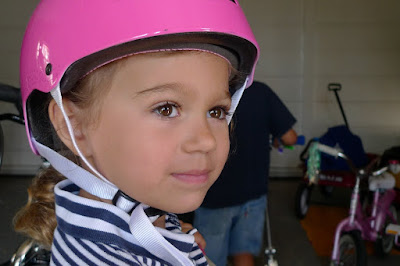 Game over. Admit it, that helmeted girl is pure win. Check, and Mate.

This brings me to the general issue of bike safety. Some take this issue head on, writing articles with titles like this:

Admirable. Direct. What could be more important? Well, this could be:

Safe and Healthy Bike Seats for Men and Women
They had me at “coccyx pain”:

"We make kids wear helmets and knee pads," Dr. Goldstein said. "But no one thinks about protecting the crotch."

It does seem obvious, but Dr. Goldstein is so right; that point cannot be stressed eoungh. They listed several bike saddles and their relative merits crotch-protecting-wise. But one stood out - "The Spongy Wonder":

“As I finished the research I decided to try the Spongy Wonder. I haven't been biking much lately, so it's hard to tell whether I'll get used to it quickly. I don't suffer from numbness anymore, but I find it hard to signal turns, since I don't feel safe enough to let my hands go of the handle bars. My friend who uses this seat, said that I need a bike with a higher frame, so that I could use my hip to lean on the frame, while I take my hand off the handle bar. He says it works well for him. Time will show.”

OK. The lack of numbness seems to be a net positive. I have experienced near total numbness in my Spongy Wonder area at about mile 18 - figured it probably was saddle-related. So now I have that ironed out. But this part concerned me a bit - "I find it hard to signal turns, since I don't feel safe enough to let my hands go of the handle bars." I think this confirms that a safe seat, even one (purportedly) as safe as the S.W. can't provide a letting-go-of-the-handle-bars-to-signal level of safety. But really, what can?

It makes me think the rider's saddle may not be the primary issue. But the writer got advice: "My friend who uses this seat, said that I need a bike with a higher frame, so that I could use my hip to lean on the frame, while I take my hand off the handle bar. He says it works well for him." I think their friend may have been as high as the frame they were recommending. About this high: 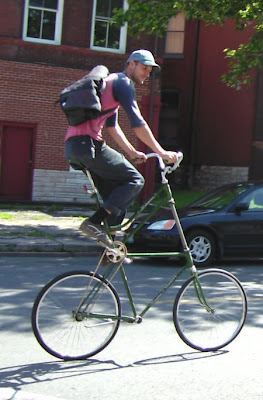 Seriously, I am having great difficulty imagining a riding position that includes hip-on-frame leaning. I mean, how do you do that? I strapped on my Google shoes and trust me, there's nothing...

But when you expose yourself to a post with the tags, "bike, seat, safety, saddle, erectile dysfunction, health, pain, numbness, chafing, prostate" you know you're on shaky ground. Best to saddle up and move on.

So move on I did. And this question caught my eye: "Is it safe to mountain-bike during pregnancy?"

One commenter had this sage advice: “I don't think it's the biking itself that is a problem it is the falling.” So true.

Well someone should have told this very masculine looking young lady, who, reliable sources have told me, was most definitely with child: 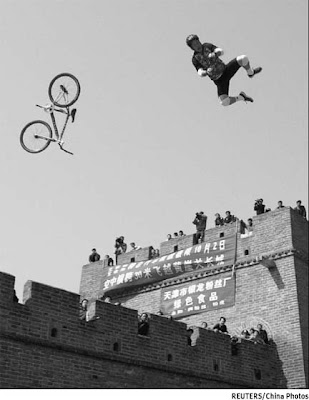 I won't go into the details, but this experiment did not end well, helmet or no. So this bike safety thing ran far deeper than even I, a regular rider, would have ever thought. I continued to dive down these bottomless linkholes, and here's what came next:

There is More to Bike Safety than a Helmet

"There are many aspects of bike fit that can affect your ability to ride safely. If the title of this article resonates to you, then chances are something has gone awry with your bike riding, or the safety of your current bike fit. Deciding that your health and sexual function are important enough to warrant an improved position on your bike is taking an active step to riding in comfort and peace of mind... When I sit on a standard saddle (a Selle Flite for ex), I can feel the pressure in all the wrong places and it is very uncomfortable for me because I know what is going on physiologically."

OK, my peace of mind was just shot to hell. But after considering the impact of mountain biking on pregnancy and now the impact of my saddle on my very ability to bring about the aforementioned pregnancy... well, I had to go right to the source. So I wrote the author:

"I was reading your article about bike seats and sexual issues tonight, with both concern and interest. If the problem is specifically erectile dysfunction, that is clearly not good. I love to ride, but not only the bike (ba-dum-bum - if you know what I mean).

"But I was wondering if ill-fitting bike seats can cause other issues, making actual reproduction less likely? I was reading some other articles about the safety of mountain biking while pregnant, and while they recommended against it, they did not say it would guarantee a child-free lifestyle. [What I neglected to mention in my letter is that I have found wearing a bike helmet to be an extremely reliable form of contraception, since it is then unlikely anyone will have sex with you in the first place.]

"So, my question is, would you consider an ill-fitting bike seat an effective method of birth control? If the answer is yes, you mentioned the Selle Italia Flite, but are there other saddles that would be as effective?

I got this response:

"Jim, anything that puts pressure on your nerves and arteries that run under your taint is considered a method of birth control. But its pre-birth control..more like booty control. If your stuff doesn't work, then you can't even play."

Damn. Helmets were seeming more and more like a distraction. The issue is taint-trauma, for crissakes. Still, the public is obsessed with helmets. I saw this desperate post:

This whole thing was turning upside down. It started with the debate as to whether riding a bike without a helmet was safe, and now I was finding that the question was actually whether it was safe to ride with a helmet!

Dr. Cory let it all out:

He went on, but I'll spare you his propaganda and the obvious fact that Dr. Cory is in the pocket of Big Helmet. So I went to the only location I felt I could place my trust - the content related ads in the side bar.

Damn. Clearly there was a relationship between bike safety and sex that simply could not be denied. And it was moving into the criminal arena.

So I have come to this conclusion. If a helmet is to be worn, it needs something of a "helmet-offset". The risks and downsides are just too great. It may be as simple as creating a diversion, a bike that has the firepower to take on the proven fashion-trampling mojo of the helmet. Maybe a ride like this: 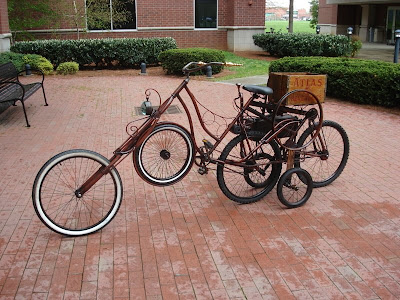 Anything less would just be foolhardy.
Posted by jhaygood at 3:05 PM