First off, I was watching the Tour de France this morning and saw this spot for AutoZone which should get some kind of Clio for it's disservice-to-mankind and backwards thinking. The storyline is a kid on a bike fixes up an old beater car (with parts from AutoZone, natch...) and ends with the line, "At least now when I go, it's not on my bike!"

Nice going AutoZone and agency-of-record Sponge! And the genius that bought time on the TdF really deserves something special...

OK, just had to mention that. 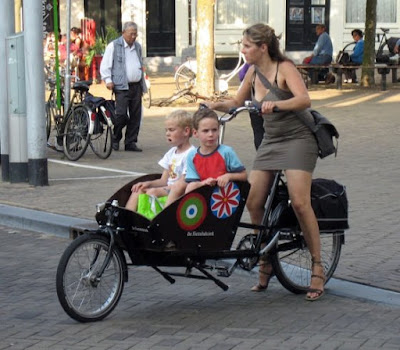 I've always loved these Bakfiets (European cargo/kid hauling bikes) and not only because they are often shown with some comely Euro-Spokesmodel-Mom in the cockpit. But these bikes with their "kid-forward" design always make me think of that Laurie Anderson song where she delivers this little spoken-word piece:

"After doing these concerts in French, I usually had the temporary illusion that I could actually speak French, but as soon as I walked out on the street, and someone asked me simple directions, I realized I couldn't speak a single word.

"As a result of this inadequacy, I found that the people I had the most rapport with were the babies. And one of the things I noticed about these babies was that they were apparently being used as some kind of traffic testers. Their mothers would be pushing them along in their strollers--and they would come to a busy street with lots of parked cars--and the mother can't see what the traffic is like because of all the parked cars--so she just sort of edges the stroller out into the street and cranes her head out afterwards.

"And the most striking thing about this is the expression on these babies' faces as they sit there in the middle of traffic, stranded, banging those little gavels they've all got. And they can't even speak English."

I think us bike riders can all relate to this feeling, like we are out there on the road as some kind of traffic testers to answer the question, "Just how dangerous is it to ride bikes among the internal combusters?" Well, "quite" is many rider's answer. That and banging our little gavels.

Alex Thompson is spearheading a drive to take back Santa Monica's Bronze award for bike friendliness since he feels that many aspects of riding in Santa Monica aren't Bronze-worthy, and that local riders weren't consulted in the process. I asked him to describe the safety situation in Santa Monica in one to five words and his response was, "Not very safe." He also offered, "Just like Los Angeles" as a backup, which may be more to the point since Los Angeles was not awarded Bronze or Pewter or any other color. They barely got the "Los Angeles" award for bike friendliness, which not only doesn't exist, but it's nothing to brag about and should have been a gimme.

Local officials feel Thompson's approach has a "cutting your nose to spite your face" quality, that local advocates in government should be encouraged for what they do, not reprimanded when they come up short. I'm not sure where I fall on this, but if there is in fact any laurels-resting-upon because of this bronzing, then I'd side with Alex. I know some city council members are fighting the good fight, and hopefully both sides will work to prove their point and we riders will be better off for their efforts.

My experience of bike safety in Santa Monica has been that it depends where you ride. The most dangerous thing I face in my 2-mile commute is getting grease on my pants, while other journeys can be more touch & go. I rode down 23rd/Walgrove the other day (and there are only three crappy choices to ride north/south like that - Centinela, Walgrove or Lincoln) and man that was not a "Bronze" experience (and also only partially in Santa Monica proper). The color that came to mind was more of a crimson, hamburgery shade illuminated by the flashing lights of first responders. The League of American Bicyclists might consider adding a new award - the "Hamburger", though I'm quite aware there already is a Hamburger award, and it was won by Barry M. Brenner in 1999. He looks like he deserved it: 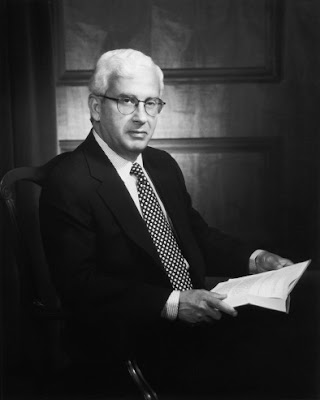 Maybe our streets could be graded based on what you actually experience, like "Verbal abuse", "Close Call" and "Compound Fracture". Lincoln Boulevard has tantalizing "Bike Route" signage, obviously installed by someone with a mischievously dark sense of humor. Or maybe they just had extra signs. Anyway, Lincoln deserves a "Close Call" designation at best.

The oft-heard biker's lament is that people get behind the wheel and become assholes. Or maybe they get in the car that way. But I've found that I've gotten very little grief from the drivers I share the road with. As Markos Moulitsas recently tweeted, “Amazing how most car drivers are nice to cyclists out here, giving right of way when it's theirs, etc. So few assholes, but they do exist." That is actually my experience too, though I've not tweeted as such. But then Markos tweets about everything, to the point I think he may have #twitterrhea. Actual diagnosis is difficult since I just made up the disease. [UPDATE: Apparently this condition was previously identified... Dang, I could taste that Nobel.]

As Markos mentions, drivers often give the right of way even when it's theirs (which I actually find annoying - I like the order of a clear right-of-way etiquette). My feeling is they assume I'm going to ignore all rules of the road (since some highly visible cyclists do in fact ignore all rules of the road) and so they just wave me on. So, my main act of bike advocacy is the five-finger salute - I wave at drivers all the time. Usually as a thank you, or sometimes just to say, "Hey, here I am! Please don't send me to the ER!" Eye-contact is the bike rider's best defense.

I think we riders that try to cooperate with cars on the road need to make our numbers known, highlight our good citizenship, otherwise all people remember is that guy flying through a four-way stop filled with cars, salmoning up the wrong side of the road, and acting like the inevitable near-miss is the car driver's fault. Smart money says those riders are probably dicks when they get behind the wheel, too.

But since the rules and the infrastructure were not made with us in mind, we often are left to improvise. I understand how that need for improvisation combined with a youthful sense of immortality can go all Ornette Coleman without much encouragement. It's wrong, but as Chris Rock said, "I understand..."

In one sense I feel complaining about biking conditions in Santa Monica is like complaining about the breeze and the chill in the air here every evening right when you want to sit out back with a Mojito (a complaint I've often made) - many people from colder/more bike-hostile environs would scoff (actually have scoffed). Still, things could be so much better here.

I believe that making things better for bikes and pedestrians makes for a much better local environment for everyone - commuters, residents and businesses. And here is where I think bike advocacy sometimes gets off track: When we push for things that make life better for bikes, it needs to clearly make life better for pedestrians and cars too - it can't be zero sum. As bike advocates we need something that seems even rarer than a well-spent infrastructure dollar - broad-based community support.

Yes, we need better infrastructure and more of it. But it's ultimately more about a broad culture that is embracing the need for that infrastructure. We need to advocate by example, in growing groups, with increasing visibility, cooperation, practicality, innovation and humor. If the only force pushing for the changes we want is our ragtag band of believers (I love you, man!) we will continue to get what we're getting - the scraps left over after Big Car has taken the good stuff.

What we need to do (while we petition and cajole and influence and demand and all that) is find ways to grow our group. We need a larger constituency. We need non-car transportation, complete streets and livable cities to go mainstream, at least far more mainstream than they currently are. We need a public impression of our movement that is compelling and appealing.

We need more than just current riders - it simply isn't enough. We need to ally ourselves with other groups, some that may even seem like adversaries, and create a broader, positive coalition. It's like the Apollo Alliance - the "environmental" group that has unified previous adversaries (enviros, labor and business, for example) and shown that sustainability is in everyone's self-interest. The Apollo Alliance sets a very good example for us, I think. A movement always has to play to people's self-interest.

Looking at it this way, we need car drivers pushing for our cause, we need pedestrians backing us up, we need business speaking up for our infrastructure requests. If our approach is to go toe-to-toe with these other groups, zero-summing each other, our progress will be... well, what it is now. Meager.

So we have to hold up examples like NYC's Commissioner of the DOT Janette Sadik-Kahn to our representatives and say, "If New York City can do it, if they can turn Broadway into a pedestrian mall, then we have no excuse." Some encouragement, some shame. Some five-finger salutes, some Alex Thompson.

But we need to dump old thinking that hasn't worked, old ideas about who is with us and who is against us, and replace it with a bigger idea. Something broader. More popular. A movement that attracts people, not something they pre-judge and avoid.

When that AutoZone spot doesn't get past the pitch stage, we'll know we're making progress.
Posted by jhaygood at 9:51 AM