So here's the second in my series on interesting bikes (is two a series?). I'm looking for something for myself, but sometimes I just find stuff that I just like, even if it doesn't suit my particular needs. Case in point, the Giant Suede Coasting DX (also garnering an honorable mention in the most inscrutable name contest). Seems to sell for just under a grand. 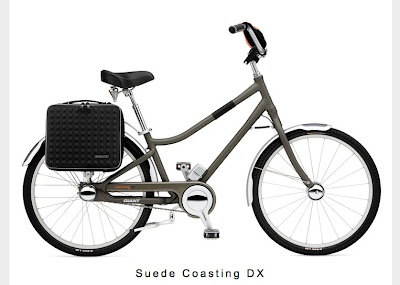 This is just a sweet looking bike. I love the way they have taken the Dutch city bike idea and really made it new. Many companies try this in different ways, but I think Giant really nailed it. It looks retro, but it looks totally modern at the same time - it pulls in both directions. It's like one of those concept cars you see that are so cool looking, but never really get mass-produced. But you can actually buy this. If I could justify it, I would totally buy one of these just for kicks. And just like in politics, good behavior should be rewarded. 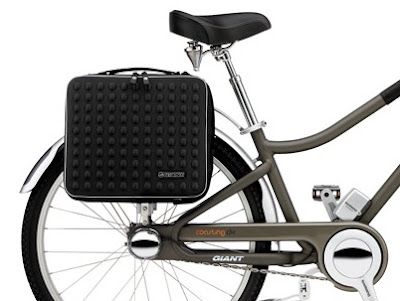 That gorgeous pannier jumps out first (can I just buy one of those?!). And then the tried-and-true upright, step-through geometry. (And don't think that's just a "girl's bike", in Europe that design's not gender-specific, just practical. They are confident in their masculinity, so nut-up guys.) 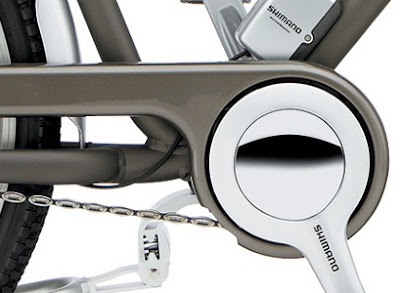 Then there's the details like the chrome hubs and crank/chainwheel cover thing - those gleaming things rock. Then there's the nice, uncluttered paint job (this bike could have easily been ruined with a ghastly paint job) and continues with the nice fender details, the little handlebar bag, the sleek chainguard, the centered, symmetrical kickstand, leather grips and simple, comfy saddle.

I mean seriously, how many things did they get right on this bike, designwise? That is a real accomplishment. Working in the creative field myself, I know how downright impossible it is to get a clean, simple new idea through the swamps of group-think. If they haven't won awards for this bike, they certainly should have.

On the technical spec side it's mostly typical: Aluminum frame with a steel fork, coaster brakes and a suspension seatpost. The unusual thing is the "Coasting automatic drivetrain", some kind of, well, automatic drivetrain. I'd imagine it's controlled by that little box on the tube above the cranks, but (and here's my one complaint) I searched the Giant website and couldn't really figure out what a "Coasting automatic drivetrain" is! A search brings up no results, and it's not covered anywhere I could find. Seems like something that unusual would be featured, but there you go. [UPDATE: Here's info on that...] 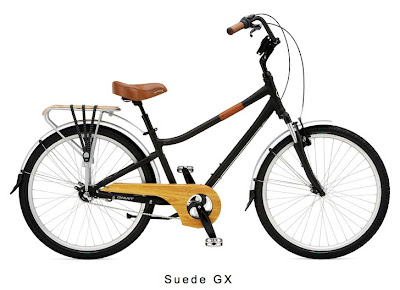 They have others in this line that are nice, like the Suede GX shown here, but they tend to be more typical, lacking the Jetson's flair. And that woodgrain chainguard might need further, in-person inspection! All the bikes in their Metro series have good points, addressing different needs.

So hat's off to Giant. You had me at... sweet panniers? Hmm, doesn't exactly roll off the tongue...
Posted by jhaygood at 6:46 AM