Australian bike stairs make me go all mushy inside

OK, we have our bike lanes, where you can choose between being clipped by a passing car or doored by a parked one. Hey wait, you could do both at the same time! And if some other driver nuzzled up to your rear wheel, revved their engine and yelled, "Get off the road!" you'd have the bike commuter hat-trick!

We deal with these things, and you know what? It's still fun. But man, our legislators and civil engineers could really make our life easier. They could make a bike route that you could actually let your kids ride on, because God knows that isn't the case in most places now. That is really the criteria designers of bike infrastructure should use when considering improvements for bikes - Would you let your kids ride on it? Bike Boulevards anyone? 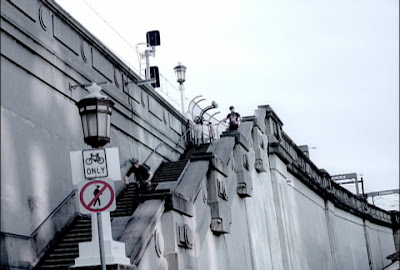 So with that feeling of persecution in mind, I was working on a project recently and these images rose before my eyes, like some apparition. These were taken in Australia and show that they see bikes in a different way. They obviously thought, "How can we make life better for people that actually pull their weight in this whole we-are-on-a-collision-course-with-unsustainability issue by leaving their cars at home?" So they dedicated some space for those bike commuters. They realized, getting people on foot and people on bikes down the same stairways has problems, so how about making one set of stairs just for bikes? The image above shows that this stairway is not for pedestrians, it's just for bikes! 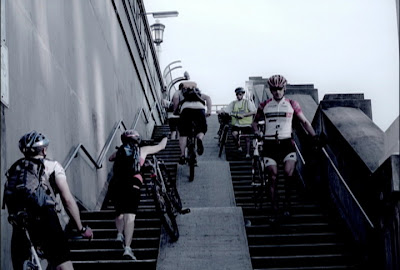 And in this photo you can see how it works. They put this ramp in the middle of the stairs so that a bike can be rolled while the rider walks. No more cyclo-crossing it. Some of these guys (and gals) are actually riding up (and down), but I doubt that was what was intended. (Also note everyone there wears a helmet. Just sayin'.)

In some quick googling I saw this entry at Copenhagenize. Of course they have similar things over there. They love their bike commuters. They have embraced bikes as transportation. They aren't being dragged kicking and screaming into a more sustainable society. But hey, we got Dylan and the Snuggie...